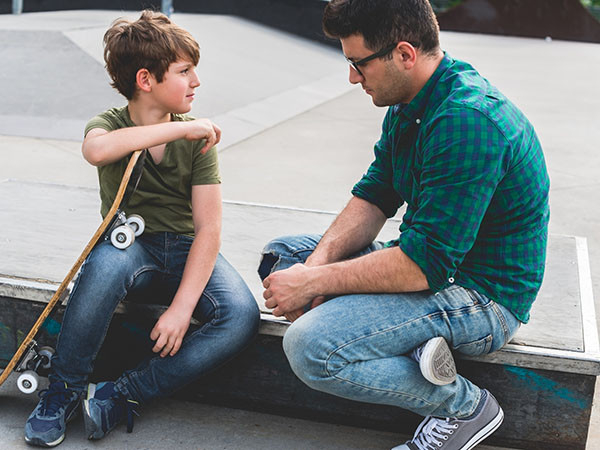 The news these days is overwhelming in its awfulness. War is underway in eastern Europe. Climate change looms, contributing to wildfires and flooding. Incomprehensible shootings occur with numbing regularity. The pandemic seems to be shifting from an immediate threat to health to an endemic illness — yet it’s still affecting us. The news has been so horrible, and so unrelenting, that it is hard to even process it.

Imagine processing it as a child?

Our first instinct is usually to shelter our children from the news and not say anything about it to them at all. That’s completely understandable, and if your child is very young or you are certain for some other reason that they aren’t going to hear about it, then not saying anything is a viable option.

Also, as parents it’s important that we give our children the perspective and skills they need to navigate this scary world where, let’s be honest, bad things happen. The way you talk to children about tragedies in the news can help them cope not just now, but in the future.

The American Academy of Pediatrics has all sorts of resources to help parents talk with children about tragedies. Here are four simple things all parents can and should do:

1. Tell them what happened, in simple terms. Be honest, but skip the gory details. Answer their questions just as simply and honestly. If you think — or know — that your child has already heard something, ask them what they’ve heard. That way you can correct any misinformation, and know not only what you need to explain but also what you may need to reassure them about.

2. Be mindful of the media that your child sees. The news can be very graphic, and because the media are as much in the business of gaining viewers as of delivering news, they tend to make things as dramatic as possible and play footage over and over again. When the planes flew into the Twin Towers on 9/11, my husband and I were glued to the television, not realizing that one of our daughters, who was 3 years old at the time, thought that planes were literally flying into buildings again and again. It wasn’t until she said, “Are those planes going to come here too?” that we shut off the TV and didn’t turn it back on again until all the children were in bed.

3. Make sure your child knows that you and others are always doing everything you can to keep them safe. Talk about some of the ways you keep them safe, ways that are relevant to the tragedy you are talking about. Make a safety plan as a family for things like extreme weather or getting separated. Help them think about what they might do if they are ever in a scary situation, and who they could turn to for help. Which leads me to the most important thing to do…

The world can be a scary place, yet there is much we can do — from a very young age — to help children build strengths and nurture resilience, even in the face of tragedy.

No comments to show.